The Meaning of Rosebud 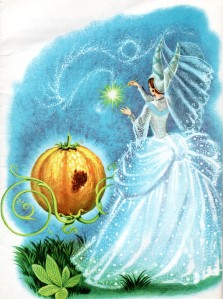 Cinderella’s Fairy Godmother. Once I told someone I had the same dress.

“…When I was five, my grandfather had bought me a picture book collection of fairy tales. It’d included, among others, my favorite princess stories: Cinderella, Sleeping Beauty, Snow White and Beauty and the Beast.

I’d fallen in love with the illustrations. The princesses were lovely and wore brightly colored baroque gowns with deep necklines, narrow waistline and cascades of brocade and silk supported by wide hoops. In my young imagination, the princes, with their pageboy haircuts, sweet faces and flamboyant clothes, represented the epitome of male beauty. I think I had my first crush on one of them. 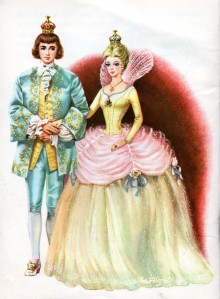 Cinderella in her beautiful gown and her prince with the pageboy haircut.

Most vividly I remembered the fairy godmother from Cinderella. Unlike her plump, grandmotherly Disney counterpart wrapped in a shapeless cloak, that particular fairy godmother was a young woman in a beautiful bluish-white organdy gown. She looked more like Cinderella’s best friend than her fairy godmother.

That was the image that immediately popped up in my mind when Morgaine, the Ellida of Gelltydd Coch clan, stepped into the hallway…”

BFFs – The beautiful Fairy Godmother and her protege.

The true story that inspired this episode from my book goes like this: when I was five, my aunt bought me a collection of sixteen fairy tales. Beauty and the Beast, my favorite, wasn’t among them. I was already familiar with the stories, but the illustrations… Oh! My five-year-old mind was absolutely fascinated, my imagination on fire. Thanks to them, I began to dream, to create my own world and live happily in it. I’ve never stopped.

In my own version, the dwarfs left the forest with SW and her prince and lived in the palace. They also deserved their HEA, didn’t they?

Those picture books, of course, weren’t my first experience with children’s literature, but their influence was profound. I would entertain myself for hours by continuing those stories, adding new characters and twists, imagining the palaces and gardens. Risen by loving grandparents, but deprived of the company of peers, I wasn’t lonely anymore. All of a sudden, I could have everything I was lacking – parents, siblings, other children… I only needed to close my eyes.

Later, I’d learn how to do that with my eyes open. 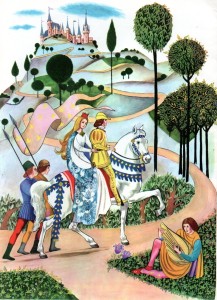 Just awoken, Sleeping Beauty is riding to her new home. The SB illustrations resemble the simple elegance of medieval tapestries compared to the baroque splendor of Cinderella.

I soon became a passionate reader and much, much later a writer — those fairy tales had planted the seeds. When I turned seven and left my grandparents, the books stayed there. I had to hand them over to the future generations – my younger sister, who’d just replaced me at my grandparents’ home, and even younger cousins. All I could take with me were those stories and pictures stored in my memory, and a hope that my successors wouldn’t ruin my books–still in pristine condition–in my absence.

And then, one summer, when I returned, they weren’t there anymore.

Not until the Internet age was I able to track them down. It still took me forever, but a few years ago, I bought twelve from an online seller, among them Cinderella, Sleeping Beauty and Snow White. I’m still searching for the four that I’m missing.

The cover of SB.

Sometimes–not often–I take them from the shelf and I look at them — my ‘rosebud’, the symbol of childhood innocence and true happiness. Right, Mr. Welles?

About the illustrator: The collection is illustrated by F. Nerri, an Italian watercolor painter. I couldn’t find much about him on the Internet. All the covers for this collection were made in the same elaborate, vibrant manner that evokes the grandeur of the of times of Charles Perrault (1628-1703), who re-told those fairy tales. Inside, however, Nerri used many styles and techniques to match the stories (Aladdin, for example, is very different from Sleeping Beauty, or Alice in Wonderland from The Little Mermaid). It seems to me that he tried to suggest the geographical origins as well as the epoque when some stories appeared or were for the first time recorded, situating, through his illustrations, for example, Sleeping Beauty in the late medieval/early renaissance age, but Cinderella in some later times.

Not unlike my characters, I lead a double life: by day I'm a mother, a friend, a colleague, and the queen of my kitchen. When the moon rises, however, I shift into my other self and, as Queen of the Night, I reign the magical world of my imagination.
View all posts by jfkaufmann →
This entry was posted in Home and tagged book illustrations, book illustrators, European fairy tale tradition, F. Nerri, fairy-tale retelling, fairy-tales. Bookmark the permalink.

4 Responses to The Meaning of Rosebud