Posted on February 7, 2019 by jfkaufmann

A five-star review of J. P. McLean’s Wings of Prey, the concluding book of The Gift Legacy. 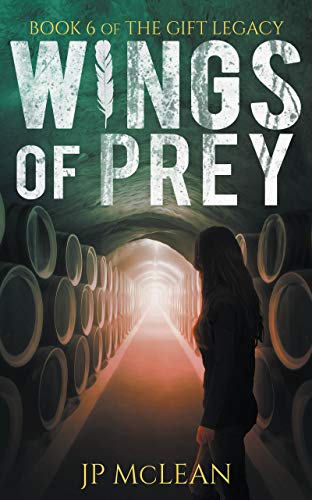 I was reading the last book in The Gift Legacy with enjoyment mixed with that specific sadness we sometimes feel when the time comes to say goodbye to our fictional friends. Since Book 1, Secret Sky, I’ve been so absorbed with the story and its characters that, at one moment, they had stopped being fiction and moved into the place of my intimate reality.

Writing the last book in a series can be tricky, but J.P. McLean did it with the ease, elegance and skills of a gifted, genuine storyteller. Sometimes authors struggle to maintain the same quality level of the individual books within a series, but she avoided every trap and maintained the high standards she’d set with the first book. All the key elements in each of the installments, including Wings of Prey, are consistently up to the mark: the plot, the characters’ development, the settings, the dialogue, the tone, the voice… It’s a marvelous achievement, even more so since The Gift Legacy series is, in fact, one story, focused on the same characters and a singular, although multifaceted, main conflict.

The Gift Legacy is one of my favourite urban fantasy series; I’ve said this more than once. It stands shoulder-to-shoulder with some pretty big names. Not only that, but I can list, off the top of my head, quite a few well-known authors of well-known fantasy series who, unlike J.P. McLean, have dropped the ball at some point. The Gift Legacy as a series, as well as each of its six parts, possesses a fine balance and inner harmony that keeps all its pieces seamlessly together. The lines between the magical and the real are melted in the best posible way – the magic is so conceivable that it feels real, and the reality is often beautifully magical.

In the end, it was one particular aspect of that inner equilibrium in Wings of Prey that makes my departure from J.P. McLean’s words easier. The inevitable end was counterbalanced with a great, satisfactory closure.

The six books of The Gift Legacy are definitively keepers. I will read them again. I highly recommend this series to everyone who loves (urban and other) fantasies, but not only to them. The reluctant and unsure fantasy readers (adult, I must add; these books are too sexy for YA readership) may easily change their mind about this genre after reading J.P. McLean’s books.

Not unlike my characters, I lead a double life: by day I'm a mother, a friend, a colleague, and the queen of my kitchen. When the moon rises, however, I shift into my other self and, as Queen of the Night, I reign the magical world of my imagination.
View all posts by jfkaufmann →
This entry was posted in A closer look, Home and tagged book reviews, contemporary fantasy, fantasy, J. P. McLean, Reviews, suspense, The Gift Legacy, urban fantasy, Wings of Prey by J. P. McLean. Bookmark the permalink.

2 Responses to A Magnificent Farewell